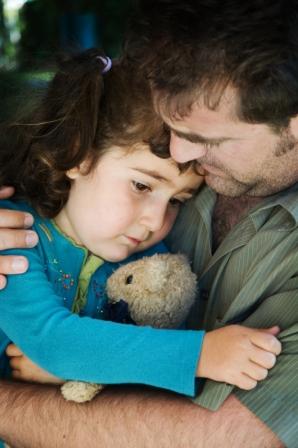 At age 4 our daughter, Michelle, was diagnosed with Selective Mutism (SM). SM is a psychiatric disorder most commonly found in children. It is characterized by a “consistent failure to speak in certain settings and continues for more than one month [Diagnostic and Statistical Manual of Mental Disorders – IV, 1994].” These children understand the spoken language and have the ability to speak. Presently, SM is thought to be the children’s version of “social phobia” and related to severe anxiety. It is considered to be a rare disorder, affecting one in every 1,000 school-age children. Many health care professionals think it is more prevalent than previously recorded. SM is a highly misunderstood disorder and is often ignored or brushed off as shyness.

At home, Michelle was an early talker. She was bright, inquisitive, active, animated and very verbal. At school, at friend’s homes and in other major social situations, she would be all dressed up, ready to play and speak up, but her words just wouldn’t come out. At first we thought it was just shyness, but later we learned it was much more.

At our first pre-school conference, when Michelle was 3 ½ years old, the teachers asked us if she was “mute” at home. We responded, “of course not,” being unaware that she had never spoken even one word to her teachers and would only speak to a few “select” children in the classroom, but not many. We were shocked. It didn’t make sense to us. Michelle was always so happy.

The following year of pre-school, at age 4, Michelle had stopped talking to the children and had also stopped engaging in activities. She would be the sole child alone on the side of the playground, while all the other children carried on laughing and playing as children do. Michelle wanted to join in, but her feet wouldn’t take her. She felt paralyzed.

My husband and I were pro-active from the beginning. We were so fortunate that her problem was diagnosed early in her life, giving us the opportunity to address the SM at a young age. Immediately, we sought out professional guidance. We went to both child psychologists and psychiatrists, and spent hours learning about the disorder. We employed many techniques to assist Michelle, but her gains were so painfully small. All the health care professionals discussed a treatment with one of the SSRIs [Selective Serotonergic Reuptake Inhibiters] such as Prozac, Paxil, or Zoloft, which increase the levels of serotonin in the brain. We were extremely reluctant to place our daughter, at that time almost 5 years old, on psychotropic drugs.

After agonizing over the possibility of drug therapy for months, we finally started Michelle on Paxil. Within days, we noticed significant, positive changes with no side effects. After one week on medication, we learned that at school Michelle was a “new child.” It was a miracle because not everybody responds so quickly and easily to drug therapy. She was talking freely, interacting, playing and in most social situations, was the Michelle we had known at home. She made friends easily, the teachers began to know her and her potential, and most of all Michelle felt so good about herself. She was so proud!!! She verbalized to us that she now felt she could be like the other children.

All of our teachers, friends and relatives noticed the marked difference and commented that they had known that Michelle’s “shyness” was a temporary phase, and they were all confident that she would outgrow it. We knew that they didn’t understand about SM. It is such an unfamiliar disorder.

After a year on the medication, along with behavioral therapy, we started to slowly wean Michelle from the medicine. She is now in first grade. We have been able to successfully reduce the Paxil to half the original dose while we still continue with her behavioral therapy. Michelle is an extremely bright and well-adjusted student at school. Her teacher, who is fully aware of her situation, has not noticed any signs of SM in Michelle.

Our final goal is to wean Michelle from her current dose of Paxil. We are cautiously optimistic that one day in the near future, Michelle will be able to navigate the world “medication free.” For now, we are so grateful that our special little girl is enjoying her childhood as most other children do

We appreciate all the small things that so many parents take for granted: raising her hand to respond to a question in class, saying “trick or treat” to a stranger on Halloween, talking on the phone to a relative and asking for a Girl Scout cookie order. All those behaviors, considered so “normal”, bring us tears of joy and gratitude. How lucky we are that help was and is available!