“During the night, in the middle of a restful sleep, suddenly, Andrew starts to scream bloody murder. The entire apartment building is soon awake. Nothing could calm him down. Nobody could help. He fights, kicks, and screams in a high pitched voice. He sweats, looks around wildly, and doesn’t recognize anyone. It lasts from ten minutes to an hour, then he calms down by himself, and can go back to bed. He is OK for now, but we parents are not. We are lying in bed sleepless and waiting for another episode. In the morning, he doesn’t remember anything. And this happens a few times a night almost every night. We call him ‘Hurricane Andrew.’ ‘Why? Why he is doing that?’ What are we to do?” – Concerned Parents (2002) 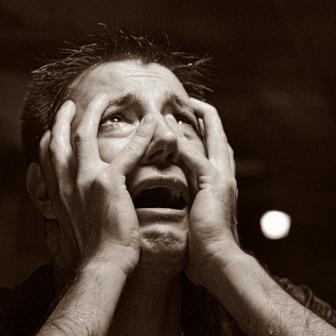 This is a typical story of a seven years old boy with what we call night terrors, which are a part of large group of proxysmal parasomnias. The term “paroxysm” originated from the Latin word paroxismus, which means “sudden attack.” “Parasomnia” is the name for unpleasant phenomena in sleep. Thus night terrors are sudden unpleasant phenomena in sleep.

Night terrors are very common in children; but also frequent in adults. In the olden days, night terrors were a source of many frightening legends about the spell known as “incubus.” In medieval times there was a book published called Malous Maleficarum, which meant “a harmer of witches.” It was used by the inquisition to identify and execute devils and witches who were actually merely men and women suffering from night terrors.

Now we know that night terrors are incomplete arousals from the deepest stages of sleep. The symptoms include : loud screaming, behavioral agitation and confusion. Episodes consisted of erratic, aimless behavior with different levels of consciousness. When parents attempt to hold the child, it increases the agitation. The child’s pulse would quicken and she/he sweats profusely. The child’s breathing is very quick, shallow and fast. The eyes are open. The general impression is that the child is terrified. Paradoxically, after awakening she/he doesn’t remember it. As one parent put it, “Night terrors are terrors for parents more then for the child, who has no idea what happened to him or her last night”

Night terrors are a benign childhood phenomena if they happen occasionally; but if they get frequent or persistent, the more they start to be associate with medical and psychological problems and they could go into adulthood.

There are many factors provoking night terrors. Among them are: cold, certain medications, blockage of the nasal breathing, adenoids, alcohol and stress (in adults). Night terrors can be associated with other problems such as bedwetting, sleepwalking, nocturnal coughing and asthma.

The good news is that precise evaluations and successful treatments are available. Now sleep medicine has uncovered the cause of night terrors and found individualized medicinal and behavioral treatment for what used to be a mysterious devil’s curse.

NOTE: If you need more information or need to find a doctor in Metropolitan Chicago area who is specialized in parasomnias, you can contact the SLEEP & HEALTH Hot line 1-847-673-7660 and we will provide you with available resources.