100+ year old medical treatment is safe and can restore balance menopausal women as well as those suffering from chronic stress. The Stellate Ganglion Block has been termed “The God Block” because of its amazing effects on many Veterans with PTSD. The Sphenopalatine Ganglion Block has been termed “The Miracle Block” because of the incredible effects it has on a wide variety of chronic pain. The book “Miracles on Park Avenue” was based on the work of Dr Milton Reder and the phenomenal relief his patients received from Sphenopalatine Ganglion Blocks (SPG Blocks). 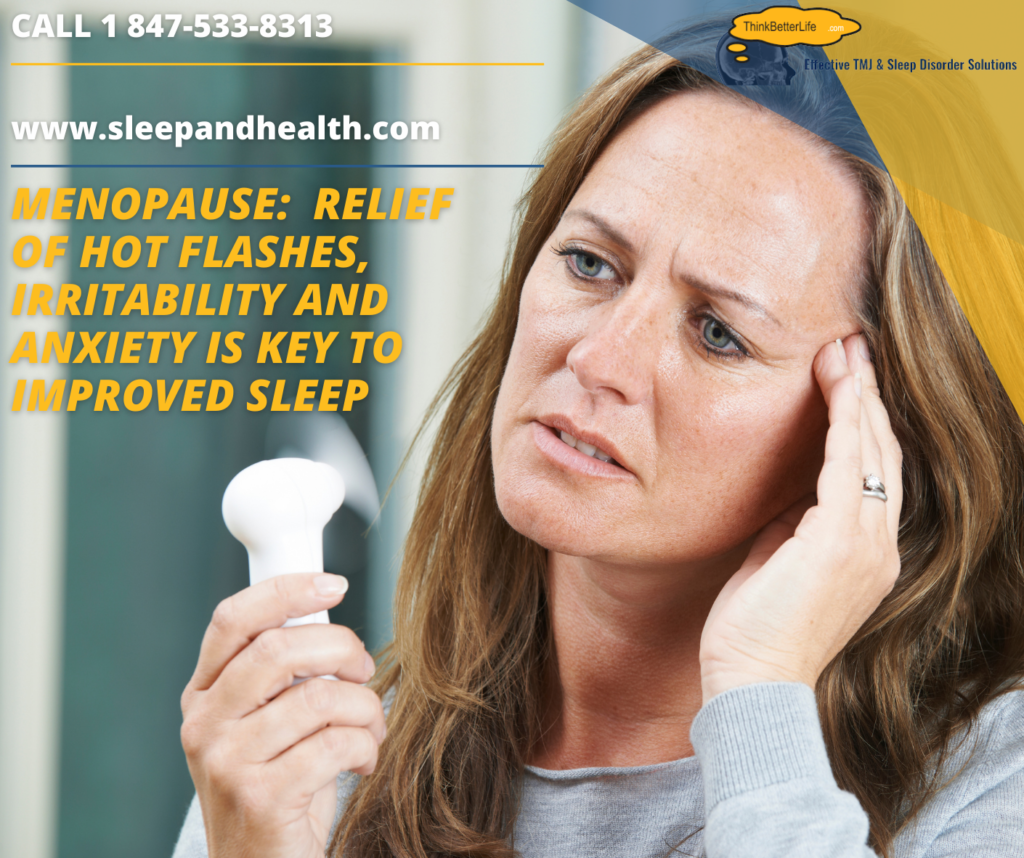 Hot Flashes and other menopausal symptoms are largely the result of the Autonomic System changes during menopause. The autonomic nervous system has two systems that need to be in balance. The Sympathetic Nervous System controls our “Fight or Flight Reflex”. It prepares us acutely for immediate action in the event of threat to life or safety. The Sympathetic System is also in control of our stress hormones and in chronic stress can lead to a system that is out of balance. This lack of balance is seen in stress related disorders and includes anxiety, feelings of anxiousness and lack of ease. We call these conditions of “Sympathetic Overload”!

Treatment of the Sympathetic Overload often restores normal patterns of sleep and helps optimize circadian rhythms in patients in addition to treatment of specific complaints.

Hot Flashes are extremely destructive to a women’s  quality of life and there are many approaches to treating them. This article will focus on resetting the balance between the Sympathetic and Parasympathetic divisions of the Autonomic Nervous System. The Stellate Ganglion Block produced headlines like “A Single Shot Eases Menopause Hot Flashes!”.  This is not new material, in fact there are 30 citations on PubMed on the efficacy of treating Hot Flashes with Stellate Ganglion Blocks!  These studies are listed at the bottom of this article.

The use of Sphenopalatine Ganglion Blocks to treat hot flashes of menopause has only andetotal evidence but this procedure is extremely safe compared to Stellate Ganglion Blocks and also has excellent evidence for treating a wide variety of chronic stress related disorders including Migraine, Cluster Headaches (treastment of choice), Sinus Headaches, TMJ Disorders, Trigeminal Neuralgia, and many other disorders.  SPG Blocks are also utilized for treating stess disorders and PTSD.

From the SPG the sympathetic and Parasympathetic nerves than travel along all of the branches of the Trigeminal Bervos Systemalong with the Somatosensory nerves and innervate a wide variety of structures.  The Trigeminal Nerves account for over 50% of all input into the brain after amplification in the Reticular Activatine System.  These nerves control the blood flow to the anterior two thirds of the brain and feed into the Limbic System which controls pain and to the Hypothalamus where homeostasis is controlled.  Hot Flashes are a symptom of unbalanced activity in the Hypothalamus.

Sphenopalatine Ganglion Blocks were first described in 1908 by Greenfield Sluder MD who described Sluder’s Neuralgia now thought to have been Cluster Headaches, Atypical  Trigeminal Neuralgia or TMJ Disorders.   Transnasal SPG Blocks were used to treat these problems very successfully.  Dr Sluder wrote two medical textbooks on the subject, the second book Nasal Neurology was groundbreaking.  Dr Sluder was Chair of the Department of OtoRhinoLaryngology at Washington University School of Medicine in St Louis.  He named the book Nasal Neurology because he felt this information was vital to Neurologist and opthamologists as well ans any other doctor treating head and neck pain and discomfort.

The use of Trans-nasal Catheters to block the Sphenopalatine Ganglion have been utilizer since 1908  and there are thousands of case studies and papers on their effectiveness for a wide and varied group of medical symptoms and conditiions.  Learn more about SPG Blocls at:  www.SPGBlocks.com

The utilization of Self-Administered Sphenopalatine Ganglion Blocks or SASPGB is a game changer allowing patients take control of their own conditions with a Cotton-Tipped Nasal Catheter thru their nose to the tissue covering the medial wall of the fossa holding the Sphenopalatine Ganglion often with remarkable results:  This link leads to dozens of testimonial videos of patients utilizing SASPGB or Self-Administered SPG Blocks.

These are well described in the following paper:  The following link will take you to the full article   -> https://www.sphenopalatineganglionblocks.com/spg-blocks-and-neuromodulation/

The Sphenopalatine Ganglion (SPG) is known to play an integral role in the pathophysiology of a wide variety of orofacial pains involving the jaws, sinuses, eyes and the trigeminal autonomic cephalalgias. It supplies direct parasympathetic innervation to the trigeminal and facial nerves. Sympathetic innervation from the superior sympathetic chain passes thru the SPG to the trigeminal and facial nerves.This paper reviews relevant and significant literature on SPG Blocks and Neuromodulation published in peer reviewed medical and dental journals. Neuromuscular Dentistry employs ULF-TENS to relax musculature and simultaneously provide neuromodulation to the ganglion.Conclusion: The effects of ULF-TENS on the autonomic nervous system acts on the Limbic System and Hypothalamus (H-P-A) to address Axis II issues during neuromuscular dental procedures. It also directly affects the autonomic component of the trigeminal nerve involved in almost all headaches and migraines as well as the Myofascial and Joint disorders of TMD.

Pilot evaluation of a stellate ganglion block for the treatment of hot flashes.

Stellate Ganglion Block for the Treatment of Hot Flashes in Patients with Breast Cancer: A Literature Review.

Guirguis M, Abdelmalak J, Jusino E, Hansen MR, Girgis GE.Ochsner J. 2015 Summer;15(2):162-9.PMID: 26130979
HRT is not recommended for patients with breast cancer. Current data regarding the use of stellate ganglion block (SGB) for the treatment of vasomotor symptoms in symptomatic women with a diagnosis of breast cancer are promising. …RESULTS: Five art …

Comparison of the effects of stellate ganglion block and paroxetine on hot flashes and sleep disturbance in breast cancer survivors.

Rahimzadeh P, Imani F, Nafissi N, Ebrahimi B, Faiz SHR.Cancer Manag Res. 2018 Oct 26;10:4831-4837.
BACKGROUND: The incidence of menopausal symptoms, including hot flashes and sleep disturbance, caused by drug treatment is a common problem in breast cancer survivors. …The aim of this study was to investigate and compare the effectiveness of Stellate GanglionBlocks……

Lipov EG, Lipov S, Joshi JR, Santucci VD, Slavin KV, Beck Vigue SG.Med Hypotheses. 2007;69(4):758-63. doi: 10.1016/j.mehy.2007.01.082.
We have found that stellate ganglion block is effective in the treatment of hot flashes in postmenopausal women, as well as those with estrogen depletion resulting from breast cancer treatment. Based on evidence that hot flashes ma …

Pilot evaluation of a stellate ganglion block for the treatment of hot flashes.

Effects of stellate–ganglion block on hot flushes and night awakenings in survivors of breast cancer: a pilot study.

Anesthetic Injections Into the Stellate Ganglion for the Treatment of Hot Flashes in Women: A Review of Clinical and Cost-Effectiveness and Guidelines.

[No authors listed]Ottawa (ON): Canadian Agency for Drugs and Technologies in Health; 2014 Apr 14.PMID: 25577932 Free Books & Documents. Review.
Hot flashes, or hot flashes, are sudden and transient periods of feeling hot and sweating, with possible co-occurrence of palpitations and anxiety. …Stellate ganglion block (SGB), a procedure aiming to selectively block …

The mechanism of action of the stellate ganglion block (SGB) is still uncertain; however it has been used successfully in treatment of chronic regional pain syndrome (CRPS) for many years. Our new insights in to the mechanism of action of the stellate ganglion block were first reported in 2007 in our publication detailing the control of hot flashes with the use of stellate ganglion blockade. We have demonstrated very significant results in the treatment of hot flashes and our most recent application of this block has been for the treatment of posttraumatic stress disorder (PTSD). Stellate ganglion has been demonstrated to have second and third order neurons connections with the central nervous system nuclei that modulate body temperature, neuropathic pain, the manifestations of PTSD, and many other areas. We believe that the commonality between the CRPS, HF and PTSD is the trigger of increased nerve growth factor (NGF) leading to the increase in brain norepinephrine (NR), which in turn is affected by the SGB leading to a prolonged reduction of NGF and eventually a decrease in NR. This, in turn, leads to a reduction or elimination of many of the symptoms of CRPS, Hot flashes, and PTSD.

Stellate–ganglion block as a treatment for severe postmenopausal flushing.

Stellate ganglion block for the management of hot flashes and sleep disturbances in breast cancer survivors: an uncontrolled experimental study with 24 weeks of follow-up.

Updated findings on the effects of stellate–ganglion block on hot flushes and night awakenings.

Risk factors, pathophysiology, and treatment of hot flashes in cancer.

Misleading conclusion from the unifying theory of the stellate ganglion block for the treatment of posttraumatic stress disorder.

What can be done about hot flushes after treatment for breast cancer?

Kontos M, Agbaje OF, Rymer J, Fentiman IS.Climacteric. 2010 Feb;13(1):4-21. doi: 10.3109/13697130903291058.PMID: 20067430 Review.
Breast cancer survivors frequently experience severe hot flushes as a result of their treatment. This can adversely affect their quality of life, compliance with treatment and overall survival. To relieve vasomotor symptoms, a variety of drugs have been used including clon …

Boutet G.Gynecol Obstet Fertil. 2012 Apr;40(4):241-54. doi: 10.1016/j.gyobfe.2012.02.015. Epub 2012 Mar 30.PMID: 22464746 French.
Hot flushes experienced by breast cancer survivors present specific issues due to their frequency, severity and difficulty to treat. …Prescription of progestin or of a menopausal hormone therapy should remain exceptional and limited to cases where all other treatments fa …