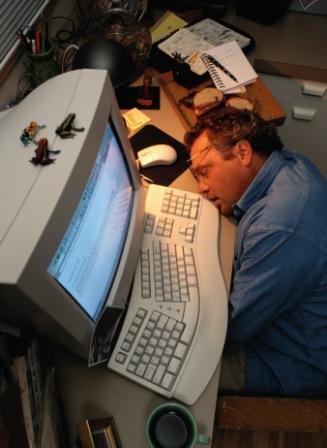 This is a real story of Nick Sabatino. Nick was a 16 year old when
his 18-year-old friend lost control of his car and the car sped down
a hill and struck a cement bridge. The vehicle was sent flying over
the creek for 43 feet and burst into flames. The driver was killed, but
Nick was rescued with more then 90% of his body burned. Not many
people survive such burn, and if they do, people became severely disable,
angry and depressed.

Nick’s story is different: he has not only survived, but his
life is highly productive. Now, Nick is 31. He is a successful motivational
speaker and a warm person. He agreed to share with us some of his experiences.

The following is an excerpt from his notes about nights with
post-burn sleep apneas.

“…Sleep eludes me and I don’t even know it. My body and mind
battle against itself as my breathing stops. I shake and tiny seizures explode
throughout my brain. I’m awake!

“I roll over to fall asleep and dream of strange people and
places. Three hours go by and I wake with a startle. My throat hurts, my head
is pounding and my stomach is sore. It’s as if I had just been hit by the night
train. It’s as if I haven’t slept at all.

I make my way to the bathroom and sit on the
toilet. Within a few minutes, I get a tremendous pain that moves from my lower
abdomen to my groin. My back flares up with a hot flash that expands to my
extremities. My head throbs. The beating of my heart increases and feels like
it’s going to explode. Nausea washes over me, again and again, like a sea of
bad intent. I grab the garbage can and put it in front of me, just as the first
volley of bile and stomach contents spew from my mouth. The stench only makes
me retch again. I tell myself over and over in my head, ‘I’m okay. I’m okay.’

“I flick on the overhead fan; the droning noise seems to
help.

“I sit like that for hours, sometimes dozing.
When I do finally get up, I’m sore, much sorer than when I woke up. I eat some
breakfast and try to watch some TV. Only I miss most of what I watch because my
eyes have a hard time staying open. This happens to me all day long, even when
I’m in the car driving. I have to be extra careful and shake my head and keep
cold air on me.

“All these, plus memory loss, back pain,
irritability and countless other things affect me because of my sleep apnea. I
want it gone, cured. It’s been almost three years without a decent night sleep
and my mind and body are at war. I’ve already nodded off six times while
writing this and I can’t remember what my girlfriend asked me to do today.

“I do not know how many these horrible nights and days I
survived. How many more I will, before I will get the normal sleep again?”

From the Editor: Nick went to a sleep center
where the diagnosis of sleep apneas was confirmed and he was placed on CPAP
with an initial good response.