A cute 6 year old boy was invited to a birthday party and after an hour is still standing in the corner holding his mother’s. The mother is trying to convince the boy to go and play with the other kids who he knows well. But the boy is staring at the floor and repeating one sentence, “Let’s go home–I don’t like this–there’s too much noise.” 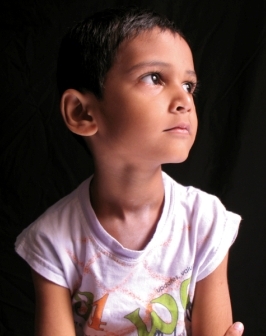 Another boy is screaming and clowning around too much and trying to get everyone’s attention. At the table, one girl, who is liked by everyone is smiling at everyone and is trying to sing songs. Everything is fine, but her mother doesn’t even stop to put down the child’s pencils, to take her to the bathroom.

What is common in all these children? They are smart and well taken care of.  So why are there “neurotics”? What is behind children with stuttering, tics, enuresis (bedwetting in sleep), tantrums, and inadequate relationships with peers? They have some kind of anxiety disorder. But why and what they are afraid of? If you take them to a pediatrician, doctors usually find no organic problem and no concrete medical pathology. Psychotropic medications are not the answer.  So, confused parents take the child to psychologists, but prolonged discussions usually do not change anything and may even “fix” the sense of inadequacy in the child’s mind.

Many children experience different sorts of traumatic events, such as parental divorce. Some children do not experience emotional damage, whereas others have emotional breakdowns. It is well known that the general way a person reacts to life events (temperament) can be “set” very early in life, almost during infancy. At that time many medical (for example, chronic otitis, oxygen deficiency), or environmental (mother’s problems, loud fights in the household) might negatively affect temperament. This anxiety of “people,” and later, life in general, will be perceived as threatening.

Is it possible to change this “anxiety reaction”? The answer is: “Yes,” but only up to a certain point. One of the best techniques is getting these kids more close to animals. For some kids it is small animals; more aggressive children may actually “mellow” by playing with and taking care of large animals. Playing with animals is known to help socialization. Another very successful technique is a therapeutic doll theater; for still another group of children the answer is medications.

We should not forget that the real patients are the parents themselves. In attempts to help the child, some parents become too protective, others play a “tough” role and still others try to deny problems with their kids all together. None of these varied approaches is of good use.

In contrast, family therapy is one of the most efficient approaches. General anxiety disorder and social anxiety are treated very successfully by therapeutic theater where children learn to play brave personalities.

Anxiety has an underlying physiology and in some cases medications may be useful. To avoid side effects, parents should discuss with their doctor the what, when and for what each medication is intended to be used and how long the course could last. The earlier you start correction or treatment the better the prognosis for the child’s successful adaptation to real life events.

Children present differently than the stereotypical adult with sleep apnea due to obstructive causes. In adults the typical case is an obese patient with perhaps a short neck and history of snoring that may awaken a spouse or family members. In children this stereotype is often not the case. Although American children are troubled by obesity as a health problem, this is not the typical cause of sleep apnea that is from obstruction in most clinical cases in childhood. Many times the children may even be underweight due to failure to thrive due to recurrent upper respiratory infections, poor sleep, and poor oral intake due to large tonsils.

The first thing that may differ is the lack of a history of snoring. Unlike adults where snoring is more common due to oral pharyngeal muscle relaxation due to aging when people go to sleep, large tonsils alone do not always cause snoring. Sometimes large adenoid tissue does however. More common in children is the tendency to have reports or restlessness and broken sleep patterns with tossing, turning, and sleeping in funny positions such as semi-seated, head positioned over the side of the bed, sleeping upside down, or other positions that enable opening of the oropharynx in sleep. This differs from the kicking or restlessness seen in typical restless legs syndrome cases, and the findings on polysomnogram differ as well. These children may have broken sleep patterns and act as if they are chronically sleep-deprived.

The findings on physical exam are usually one of large tonsils often almost touching in midline or a large uvula with less enlarged tonsils. The adenoids may also be enlarged but often may not be visualized by direct examination without an ear nose and throat specialist using indirect visualization techniques. Lateral neck x-rays or CT scans of the neck may be helpful. A polysomnogram showing obstructive apnea or hypopnea is also helpful. Treatment is usually the surgical removal of the tonsils, the adenoids, or both. Rarely Uvular procedures are necessary in kids.

Children with cerebral palsy, special needs, genetic disorders with microagnathia or cleft palates, Down’s Syndrome, and other disorders where oral motor tone, and large tongues or defective oral-pharyngeal coordination may occur are also at risk for sleep apnea of obstructive type. These children should always have careful sleep histories taken as part of their medical examinations.

Obstructive type sleep apnea may complicate other conditions. The presence of this condition and the concurrent sleep deprivation may make it harder to treat other concurrent conditions such as childhood attention disorders, depression, or seizures due to the chronic sleep disruption.

The importance of ruling out obstructive sleep apnea in childhood cannot be emphasized enough. Remember that children do not present like the stereotypical adults and do not always snore. If clinically suspected referral to appropriate sleep specialists or otolaryngologist is appropriate.