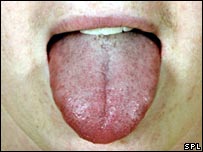 Lead researcher Dr Lucy Donaldson said: “Because we have found that different tastes change in response to changes in the two different neurotransmitters, we hope that using a taste test in depressed people will tell us which neurotransmitter is affected in their illness.”

Dr Jan Melichar, the lead psychiatrist in the study, said: “This is very exciting. Until now we have had no easy way of deciding, which is the best medication for depression.

“As a result, we get it right about 60-80% of the time. It then takes up to four weeks to see if the drug is working, or if we need to change it.

“However, with a taste test, we may be able to get it right first time.”

The findings also suggest somebody who is anxious or stressed will have a less sensitive sense of taste – which may explain why people with depression have a diminished appetite.

Professor Dave Kendall, an expert on depression at the University of Nottingham, said the research was interesting – but was unlikely to be able to determine which drugs a patient should take.

“The most efficacious antidepressants are relatively dirty drugs that enhance the availability of both noradrenaline and serotonin.

“So knowing which of these neurotransmitters is dysfunctional doesn’t really matter.”

Around 3 million people in the UK are diagnosed with depression with an estimated three times as many more going undiagnosed and therefore untreated.