Nevertheless, the nude sleeper – probably shot over several days, entertained more people than just Warhol. Wrote one appreciative reviewer who sat through the entire performance: “Sleep’s secret is that the snoozer is by no means paralyzed: Giorno moves his arm, his face shudders, his stomach rises and falls, and the camera’s angle changes.” (1) 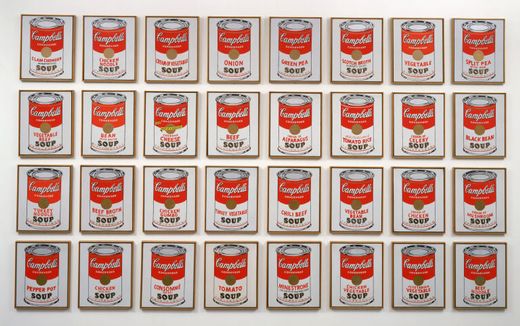 Andy’s mother, Julia Warhola, liked watching her son sleep. The Czech immigrant, whose husband died in 1942 when Andy was 14, was devoted to her third and youngest son, following him from Pittsburgh to New York, a huge transition for a simple Catholic woman in her late 50’s, especially considering the gay, often outrageous lifestyle that her son led. Andy had been a sickly child. At eight he caught rheumatic fever which was followed by complications called chorea or St. Vitus’ dance – so named because those who succumbed to it shook uncontrollably. Interestingly, Warhol later referred to these episodes as his “nervous breakdowns.”

Warhol’s artistic talents were apparent from an early age and he was chosen for special, subsidized art classes. In 1945, at age 17, he went to Carnegie Tech, the first of his family to go onto a higher education. After graduating, he went to seek his fortune in New York and, carrying his portfolio in a paper bag, impressed art directors of several magazines, including Glamour, which gave him his first assignment. Success was as instant as it could be and “by 1955 he was one of the most sought after illustrators in New York, earning over $50,000 per annum, more than many presidents of corporations.” (2)

In 1960, Warhol decided he wanted to make the transition from illustrative to fine art. He took objects and people from popular culture – from soup cans to Marilyn Monroe – and painted them in bright colors, usually repeating the subject many times. The subjects were flat and impersonal, with no brushstrokes in evidence. While Andy Warhol was not the initiator, he became the embodiment of what came to be known as pop art. Success, however, was not instant; initially no one wanted to exhibit his paintings. The day after Marilyn Monroe died of a drug overdose in 1962, Warhol took a publicity shot of her and silk-screened it using different colors. His sense of timing was both opportunistic and brilliant. The Marilyn Monroe work remains one of his most recognizable works all over the world.

Warhol took his personal image seriously. He had pale blotchy skin and once had his nose sanded. Warhol’s hair had begun to thin soon after college and he bought a blond wig. Later he acquired a silver wig to match the décor of his work/partying space called “The Factory.” One of his most mortifying moments took place at a book signing in 1985, when a woman pulled off his wig and threw it to a friend who ran out of the store. Warhol made light of it and pulled a hood from his coat over his head. His diary told a different story: “I don’t know what held me back from pushing her over the balcony. She was so pretty and well dressed. I guess I called her a bitch or something and asked how she could do it. … It was so shocking. It hurt.”(3)

Life around Warhol took on an almost cult aura. Aspiring artists and actors were drawn to him, would work for free and take care of him. Warhol, in turn, would have sequential intense relationships with both women and men. One of his followers was “Ultra Violet,” a beautiful French woman who appeared in films and later, in her book Famous for Fifteen Minutes described the exhilaration she felt when she was part of Warhol’s “in crowd.”

In 1968, Valerie Solons, sole member of SCUM, the Society for Cutting up Men, entered the factory and shot Warhol and his friend, Mario Amaya. Warhol was critically injured and was pronounced dead at the hospital. Fortunately for him, Amaya, who was not badly injured, sat up and (famously) shouted: “It’s Andy Warhol, he’s famous, he’s rich…. Do something.” The doctors ripped open Warhol’s chest to massage the heart, after which he underwent a five-hour operation to repair the damage: “the bullets had nicked a pulmonary artery and passed through vital organs before exiting, leaving a big hole in his chest.” (4)

It took years for Warhol to begin to paint again after the shooting, but that he did. He also made many movies, published a magazine and modeled. He died in 1987 after complications from a routine gallbladder operation. Warhol had led an extraordinary life, embraced the sixties, shocked, loved and created. He had always been afraid of death, but at age 59, he succumbed in his own permanent sleep.