Modigliani was born in 1884 in Livorno in northwest Italy. His family were Sephardic Jews who had lived in Italy for many generations. The family had once been wealthy but had come on somewhat harder times shortly before Modigliani’s birth. They were, however, supremely rich in culture – their pride was that they were descendants of the great philosopher, Spinoza. As a child, his mother’s sister, Laura, who wrote philosophical papers with Modigliani, introduced Modigliani to the writings of Nietzche and Bergson. What Modigliani lacked was good health – he had several bouts of pleurisy as a child and contracted typhoid fever when he was fourteen, a time when the antibiotics that now treat this infection were undreamed of. It was during this teenage illness that he decided that, if he survived, he would become a painter. He subsequently attended classes at the Livornese painter’s studio called Micheli, but his next setback was soon in coming. At sixteen, he contracted the then deadly tuberculosis. Thanks to the attentions of his mother, Eugénie, he was nursed back to health.

In 1906, at age 22, Modigliani went to Paris, then the center of the artistic universe. With the Louvre, its cafés and art academies, it was the place to be for an up-and-coming artist. Modigliani cut an elegant figure, was knowledgeable in art and philosophy, and (unlike many foreign artists) could speak French fluently. Quickly nicknamed “Modi”, he was charming and self-assured and made friends easily. When he arrived in Paris he drank moderately and did not smoke (1). But Paris was also a place where it was easy to become down-and-out, and Modigliani had limited funds from his family and his paintings did not sell. He started drinking heavily, would move from one squalid living condition to another and neglected his already fragile health.

One passion remained consistent: his need to sculpt and paint. Sculpture was his first love, but his frail physical condition that had resulted from having TB, did not allow him to pursue this form of art. Regrettably, none of his sculptures survived, but they did influence the distinct forms of linearity in his paintings. His portraits depicted figures with long necks, inexpressive despondent faces and blank, asymmetrical eyes. His nudes were graceful and erotic. “To paint a woman is to possess her,” he once said. (2) Although Modigliani was unrecognized in his own short lifetime – he would surely have become successful had he lived longer when the art market, fuelled by a new generation of American buyers, boomed in Paris in the 1920’s. (3)

Modigliani had several mistresses in spite of his lack of success and poor health. Even his looks became haggard and his teeth blackened. His last partner was Jeanne Hébuterne, who was fourteen years his junior and worshipped Modigliani – who did not treat her at all well. She bore him a daughter, also named Jeanne, who, since the couple was incapable of taking care of her, was sent to Modigliani’s sister in Italy. Jeanne Hébuterne was eight months pregnant with his second child when Modigliani died in January 1920. Grief-stricken, Jeanne committed suicide by jumping out a fifth floor window less than two days after Modigliani died. 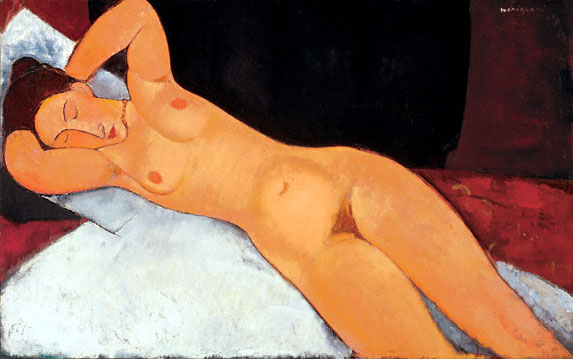 While Modigliani’s personal story is a sad one, it is remarkable that he survived as long as he did and produced so many works of art (although many of his paintings were left behind at each of his living quarters and lost). His portraits are unique and instantly recognizable around the world, while his nudes are considered among the most desirable in the history of art. (4) 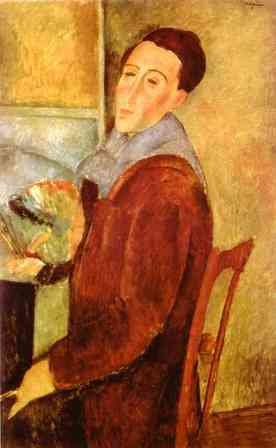